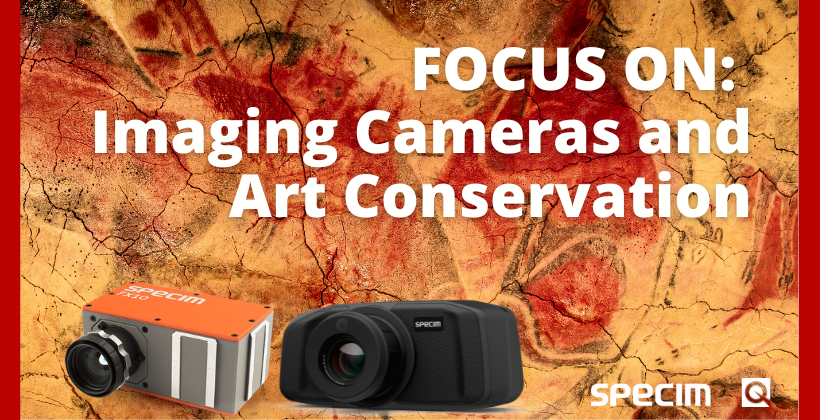 Our imaging cameras range encompasses so many applications. Here, we take a look at art and archaeology conservation, with our partners Specim Hyperspectral…

Preservation of cultural inheritance like paintings, manuscripts, maps, and old photos through documenting and transforming to digital form for archives, research, conservation, or for display is increasing remarkably. Museum laboratories and university researchers use a wider range of analytical instruments to study collections. There is a need to study, for example, materials like pigments, dyes, and binding media. These are not only to observe possible degradation or changes due to ageing or environmental conditions but also to reveal the artist’s painting technique and methods used in the work of art.

Hyperspectral imaging (HSI) is gaining wide acceptance as one of the most valuable optical tools for art archiving and restoration. As a non-invasive and non-destructive imaging technique, hyperspectral imaging is safe for even the most fragile samples. It is used remotely to scan all parts of the sample with a high spatial resolution (down to 15 µm pixel size). HSI records both spatial and spectral information, which can be used to classify the chemical, physical, and/or biological properties of the object.

In the visible range, it gives improved precision in colour measurement for recording pigment colour-change, which is essential for conservation. In near-infrared, the information hidden behind the outer layer or written text that has deteriorated and faded under environmental conditions may be revealed. Besides, fluorescence investigation is prone to highlight different solvent and binders.

Above all, there are many other applications and application fields where Specim cameras are and could be used. Specim keeps this in mind, providing researchers with performant and highly flexible instruments, allowing scientists to break the boundaries of the current knowledge. To ensure customer success, Specim also offers well established after-sales support as well as online and onsite training concepts based on customer needs.

The 1891 work ‘A Haystack in the Evening Sun’ was found to be a genuine piece of Claude Monet’s work by researchers of RECENART project in the University of Jyväskylä. The research team revealed a layer of paint over Monet’s signature, and year of the oil painting by using a hyperspectral camera developed and produced by SPECIM.

The painting has been owned by the the Gösta Serlachius Fine Arts Foundation since the 1950’s but it has not been authenticated so far because the signature is covered by paint.

The work was examined at the University in the Recenart – Research Centre for Art multidisciplinary project in Mänttä. The study used the hyperspectral camera with an XRF device, which tells of the work’s elemental composition.

“The hyperspectral camera took an image of 256 different wavelengths simultaneously in the near-infrared region. This wavelength region is not visible to the human eye. Many of the painting’s pigments which have been used and are still used today are there in the wavelength range which is partially and even completely transparent. In this case, the light reflection can be measured from the surface layer and deeper”

“The camera is principally operating as a scanner, which scans one line at a time. The optics includes a prism structure which diffuses the light’s wavelength order, a custom-made sensor is used capable of recording infrared radiation. When the camera is moved using the scanner an image of the whole picture can be obtained.”

The camera produces one table with the large number of spectral data. Monet’s signature was applied to the data spectrum separation methods, which have been studied in the international research.

“Spectral imaging and its many applications has been a favourite area of research. Two dissertations have already been published on this subject and have dealt with, among other things, medical and environmental science applications”

The news story was published in Keskisuomalainen.

Beyond the Famous Bison

The Altamira cave is located in Santillana del Mar (Cantabria, Spain) and was included in 1985 in the UNESCO World Heritage List. It is known as the Upper Palaeolithic Sistine Chapel for its famous Polychrome Ceiling and the significance of its Palaeolithic cave art.

Precisely, the study of art has focused on the famous Ceiling of the Polychromes with its bison, which artists painted for more than 20,000 years. However, Altamira has a large number of artistic representations distributed along its 290 metres of length that have not been analysed in detail and, in many cases, have never been published. The conservation of the Altamira cave and its artistic representations requires a complete inventory, its technical documentation and the updating of the knowledge of these representations, through the application of currently available techniques. The GIM Geomatics team, specialised in the management of historical heritage, has started the review and updating of the cave art catalogue with the technical support of INFAIMON.

The development of the method and the work protocols have been fine-tuned in several panels of the cave.

Many images invisible to the human eye are preserved on the walls of the Altamira cave. It is possible to recover them for the knowledge of rock art and for science through the use of photogrammetry techniques and terrestrial hyperspectral remote sensing in the work of documentation of cave art.

The integration of image analysis techniques allows rock art to be documented in a non-intrusive, rigorous, safe and detailed way. These techniques are capable of offering 2D and 3D results that can be used in any study, providing a large amount of data that is very useful for interpretation and thus change the way figures are understood.

Imaging spectrography (or hyperspectral remote sensing) makes it possible to detect areas in the cave where the rock has absorbed chemical elements that made up the pigments with which images that are no longer seen were painted. This is one of the lines of research that the Altamira Museum is currently working on   and through which hitherto unknown images of Altamira art will be discovered. The work team used the Specim IQ portable hyperspectral camera for its analysis, which is capable of quickly and reliably identifying the chemical composition of pigments in situ.

The application of these techniques in the Altamira cave has led to an improvement in the analysis and knowledge of artistic representations that are not very visible. With Specim IQ, there is no risk of damaging works of art: hyperspectral analysis is a non-invasive and safe way to collect data from paintings and manuscripts.

In the following video, Marcello Picollo, CNR Researcher at the Nello Carrara Institute of Applied Physics in Florence, demonstrates how Specim IQ is used in the analysis and conservation of works of art.

Ellipsometers Events Spectroscopy
We are celebrating 22 years of Spectroscopic Ellipsometry workshops. This free of charge workshop is aimed at both experienced ellipsometry users as well as people new to ellipsometry.