Superconducting Quantum Interference Device (SQUID) magnetometers are vital instruments in the study of magnetic materials. The high sensitivity of the equipment means that they allow for a much more accurate determination of magnetic properties on materials where the magnetism is extremely weak.

The Quantum Design MPMS®3 enables a greater range of magnetic and electrical measurements to be performed. As well as the study of novel materials such as magnetocaloric (MCE) materials, the MPMS 3 can be used to investigate superconductors, magnetic nanoparticles, 2D materials, 3D printed permanent magnets and inorganic magnetic oxides, as a function of temperature and magnetic field.

Learn more about the MPMS3 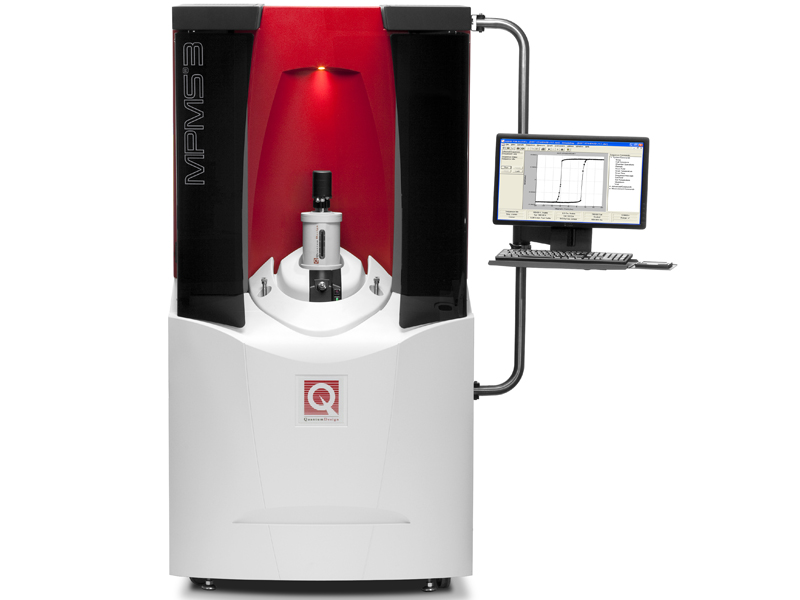 The Henry Royce Institute funded SQUID MPMS 3 is regularly being used by the University of Sheffield’s Functional Magnetics Group, as well as the wider Sheffield research community. It has enabled the study of novel magnetic materials such as magnetocaloric (MCE) materials, whose characterisation requires their magnetisation to be measured over a wide temperature and magnetic field range. The system has allowed us to study a range of these materials, as it has a wide temperature capability from 2.5K to 1000K and magnetic fields up to 7 T. For thin film research, the in-plane rotator has enabled us to study the in-plane anisotropy of new magnetic alloys.

Prof Nicola Morley, Professor of Materials Physics at the University of Sheffield, has been overseeing the Henry Royce Institute’s MPMS 3 system and, along with her group, is using it to carry out world leading research on novel soft magnetic materials such as high entropy alloys. The research aims to discover new functional magnetic materials for applications, such as transformers, actuators and magnetic-refrigeration.

“The MPMS 3 system is an ideal system for material discovery research, as a high throughput of samples can be measured quickly and easily at room temperature, with those of interest being investigated further over a wide temperature and magnetic field range. The option of ac susceptibility, as well as sample rotation allows for a complete study of these new magnetic materials.”

Prof Nicola Morley, Professor of Materials Physics at the University of Sheffield

Dr Otto Mustonen, Postdoctoral Research Associate at the University of Sheffield, has been using the Henry Royce Institute’s MPMS 3 to carry out research in the field of quantum materials, where quantum effects are strong and lead to novel properties and phenomena. Materials with strong quantum magnetism can lead to very exotic magnetic states such as quantum spin liquids, and the resulting materials could potentially be used for quantum informatics applications, which in turn could form the building blocks of an entirely new type of quantum computer.

“The MPMS 3 is by far the best magnetometer on the market. It is a sizable upgrade on previous MPMS models and it allows quicker, more accurate measurements, while its cryogen-free operation slashes running cost to a mere fraction of the older systems. And it is generally much easier to use. In my case, I often work on materials where the magnetism is extremely weak. The MPMS 3 provides a much more accurate determination of the magnetic properties for these kind of materials.”

Dr Linhao Li, Research Associate at the University of Sheffield, works predominantly on metal oxides, researching their electrical properties such as conduction mechanisms, dielectric properties and piezoelectric properties. He has used the MPMS 3 to determine the change of oxidation state of Fe ion in doped Bismuth Ferrite (BiFeO3) ceramics under different processing conditions. However, the concentration of Fe ions with changed oxidation state is relatively low and therefore hard to be verified by other techniques.

“We believed that the change of oxidation state may lead to a change in the magnetic properties that were significant enough to be picked up by the MPMS 3, and we were correct. Other magnetometers are not sufficiently sensitive to detect such a small concentration of Fe ions with a different oxidation state.”

Dr Linhao Li, Research Associate at the University of Sheffield

Having access to the SQUID MPMS 3, which is the best magnetometer available, is enabling us to carry out far more advanced research in the area of magnetics. The system has more than 15 trained users from the departments of Physics, Chemistry, Medicine and Materials Science, and we’ll be able to continue to train more people to be able to investigate further the properties of novel functional materials.

Events Imaging Cameras Webinars
Would you like to know more about the advantages of thermography for thermo-elastic stress analysis? Let yourself be inspired and deepen your expertise in a lively way.

Events Magnetometers Materials Characterisation
IMMC2021is fully online, Quantum Design are sponsoring a plenary lecture and hosting a virtual stand and we have a short talk from Randy at QDUSA.

Dr Shayz Ikram Events Imaging Cameras Uncategorized
The biennial Photonics Ireland conference series is the premier event for photonics research in Ireland, running since 2007. It covers a wide range of topics in Photonics.