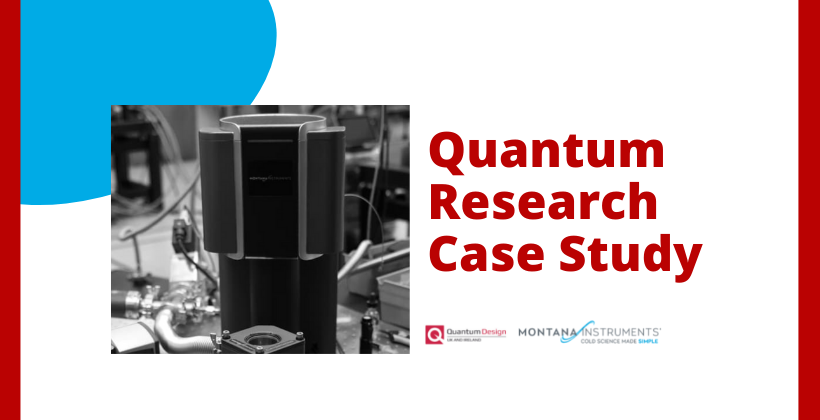 Say “yes” to quantum discovery, made possible by cryogenics

The following examples comprise a small sample of how researchers use our Montana Instruments cryostats in their experiments.

‍A research group at Argonne National Laboratory uses a Montana Instruments Cryostation® to study the potential of a hybrid superconductor/ferromagnetic heterostructure as an alternative to the standard electronic transistor for quantum memory and micro-processing.

Investigating single molecule fluorescence in the presence of dephasing

‍A group from the Centre for Cold Matter at Imperial College in London studies the quantum dynamics of single molecules in the presence of temperature-controlled dephasing.

‍Montana Instruments engineers designed a unique system for a group of researchers to test quantum optical interactions with an optical crystal acting like a sensitive thermometer.

‍A USTC Key Laboratory of Quantum Information research group uses the Montana Instruments Cryostation® to work toward the development of high-efficiency quantum repeaters by demonstrating the storage of single photons from quantum dots.

‍A premier research institution uses the Montana Instruments Cryostation® to investigate the use of photonic crystals to enhance the coupling to solid state qubits.

‍Researchers at the Chinese Academy of Sciences use a diamond anvil cell mounted inside of a Montana Instruments Cryostation® to subject InAs quantum dot specimens to pressures of up to 6.58 GPa (65,149 atmospheres) and study single-photon emissions at 4K.

Montana Instruments, along with collaborators in the Department of Physics at Montana State University, are pleased to announce their participation in the Quantum Information Science and Engineering Network (QISE-NET). The program, funded by the National Science Foundation and managed through the Chicago Quantum Exchange, pairs graduate students pursuing careers in quantum science and engineering with partners in industrial and national labs. The goal of the program is to train and develop tomorrow’s workforce of quantum scientists and engineers critical for the US to lead in quantum science and technology.

A key focus of Aaron’s work is the characterisation, modelling, and control of the decoherence mechanisms intrinsic to the materials that corrupt stored quantum information, including both the nano-scale processes within the solid-state environment as well as the macroscopic disturbances in the external environment. Across a wide range of rare-earth doped materials, temperatures below approximately 2K can dramatically suppress phonon-mediated decoherence processes, so the work requires the use of cryostats designed for these regimes.

Montana Instruments is supporting Aaron’s research by providing the use of our recently developed Cryostation® xp100 system that is capable of reaching temperatures below 1.7K. The QISE-NET collaboration will help Aaron and Montana State accelerate their discovery of novel materials for quantum applications. Their use-case will also provide feedback for improving the design of closed-cycle cryogenic systems for the rest of the QIS research community.

Investigations of QIS materials, including rare-earth materials, can be challenging due to the sensitive nature of the measurements. Ideally, the cryogenic system would introduce no additional perturbing effects to the sample being measured beyond the intrinsic properties. Closed-cycle cryostats must account for not only temperature offsets and cooling issues caused by poor thermal conduction out of the sample, but also sample mounting stresses and stray magnetic fields.

For rare-earth doped materials, whose ultra-sensitive decoherence and optical properties grow exponentially more sensitive with lower temperature, differentiating between material properties and artifacts introduced by the cryogenic system poses a significant challenge. Materials that possess well-known properties provide a means to readily observe the effects of the cryostat on the sample through decoherence and spectroscopy measurements, effectively packaging a suite of non-contact, all-optical sensors directly within the apparatus.

In his research project, Aaron selected two rare-earth crystals used in quantum memories for characterising the effects of the cryogenic system on the samples: thulium-doped yttrium gallium garnet (Tm3+:YGG) and erbium-doped yttrium orthosilicate (Er3+:YSO). Through probing the optical properties, spin dynamics, and decoherence phenomena of these materials, a clear picture of the atomic-scale rare-earth environment was constructed, uncovering several potential pitfalls and their solutions when working with closed-cycle cryostats.

A wide variety of effects were easily detected in the decoherence and optical properties of these rare-earth doped crystals, highlighting the simplicity and effectiveness of not only the sensing method, but the cryostat as well. The Cryostation® s50 reached a temperature of 1.6K and possessed sufficient cooling power to handle thermally massive integrations, such as permanent bar magnets, with minimal effect on base temperature.

By employing techniques that optimised thermal conduction, low-stress mounting, and magnetic field control within the closed-cycle cryostat, Aaron was able to replicate the dependency measurements of decoherence on temperature reported in literature that had previously been completed in classic, open-loop, helium bath cryostats.

By bringing together the expertise of the Cone-Thiel Spectroscopy Group in rare-earth properties and Montana Instruments in cryogenic hardware engineering, the QISE-NET collaboration helped to inform the design of QIS-grade cryogenic research platforms by enabling sensitive characterisation of the cryogenic system. The work also has potential benefits for the broader field of QIS by demonstrating the power and flexibility of rare-earth doped materials as a high-resolution sensor suite that can be integrated into a wide range of cryogenic systems.