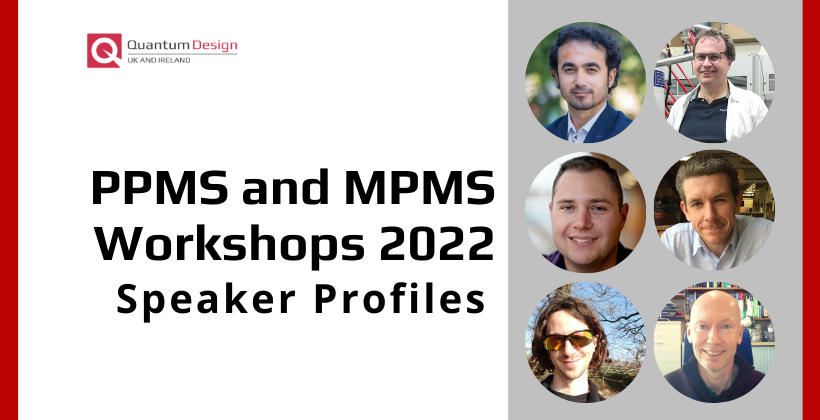 Our Quantum Design UK and Ireland PPMS DynaCool and MPMS Workshops are back, with a packed agenda of user talks, and host talks covering all manner of topics. We’ve compiled some interesting information about each of our speakers, and what they discussed on the day. We also made sure there were plenty of opportunities to create a more organic discussion, based on topics and applications specific to attendees.

Randy received his PhD in 2009 from the University of California, Davis on the topic of reversal mechanisms in magnetic nanostructures. As a postdoctoral fellow at the University of Gothenburg, Sweden he studied next generation magnetic and spin wave based data storage and processing paradigms. Randy also worked with the Swedish startup, NanOsc Instruments AB, developing a user-friendly plug-and-play FMR spectrometer. Randy joined Quantum Design in August 2016 and his specialty lies primarily in magnetic characterisation of both fundamentally interesting and technologically relevant materials.

Randy hosted the PPMS Workshop and the MPMS Workshop. Check the agendas for the topics he covered at each.

Murat has been trained as physicist at the Unité mixte de Physique CNRS/Thales in the group of Prof Albert Fert and got his PhD at the Paris Institute of Nanosciences of the Sorbonne University in 2010. After his PhD, he carried out several post-doctoral research projects in different world leading academic research laboratories, for example, Spintec Lab of the CEA/CNRS, Unité mixte de Physique CNRS/Thales, Cavendish Lab of the University of Cambridge, London Center for Nanotechnology of the University College London before joining National Physical Laboratory in 2020. His experience ranges from fundamental physics to more application-driven projects leading to major contributions in fields such as Spin-Orbitronics (i.e. Spin-orbit torque, Dzyaloshinskii-Moriya interaction, skyrmions), spin current injection in nanostructures (i.e. Graphene, Organic, Semiconductors, Superconducting) and MRAM for spintronics devices.

Gavin oversees the running and managing of the Materials Characterisation Laboratory supporting the ISIS user programme providing either access to offline instrumentation or performing measurements on behalf of the user. The facility is in high demand for pre beamtime screening of samples, post beamtime complimentary measurements, preliminary measurements for beamtime and collaborative research.​ Gavin previously worked at the Home Office Scientific Development Branch and his research interests include Magnetism, Thin film, Metamaterials, Superconductivity.​ X-ray magnetic circular dichroism. His studies were at the University of Southampton – Magnetism and Superconductivity (PhD) and University College London – Physics and Astronomy (MSci)​

Materials characterisation at ISIS is a key part in supporting the science programme and ensuring the best chance of success. The offline support laboratories follows the progress of the sample from preliminary measurement, sample screening prior/during beamtime through to follow up complimentary measurements providing additional weight to publications provided by the facility. Materials characterisation also provides a unique grounding for new and upcoming sample environments (in-situ Ferromagnetic Resonance with Polarised Neutron Reflectometry) not previously possible with reflectometer beamlines all built upon method development of characterisation techniques originating in support laboratories.

“My work focuses on the tuning of low-dimensional quantum magnet systems and materials which exhibit exotic phases like unconventional superconductivity through hydrostatic pressure, low temperatures, and ultra-high magnetic fields. I use pressure to squeeze 2D materials towards becoming fully 3D crystals – controlling dimensionality like this allows us to discover new functional quantum behaviours and states, then inform targeted design of new materials.

To facilitate these high-pressure measurements, often on low-moment antiferromagnets with weak magnetic signals, my colleagues and I developed the SquidLab MATLAB software package. SquidLab allows processing, manipulating and subtracting the magnetic background signal of bulky sample holders or environments to retrieve a small sample signal, then easy fitting and extraction of the magnetic moment. This is all within a flexible, extensible, modular GUI with friendly tutorials and manual, as well as a scriptable API for the enthusiast.”

“Seeing how powerful and useful this was in unlocking all sorts of previously-infeasible measurements in my team’s research, we decided to release it free and open source to the scientific community [1]. With over 600 downloads in its first 2 years, and glowing testimonials from users all over the world, it is clear that SquidLab is proving invaluable in enabling magnetic measurements across physics, materials science, chemistry and even biology, in all manner of sample environments and setups well beyond our initial planned use case.

I actively and enthusiastically support Users and am always happy to help extend or customise the functionality of SquidLab to meet their individual needs. I hope it will prove useful to as many researchers as possible.”

Steve Lee is Professor of Physics at the University of St Andrews with over 30 years of experience working in a diverse range of advanced and functional materials.  Although primarily interested in the fundamental properties of magnetic and superconducting materials, he began his career working in industry and has subsequently had periods of significant engagement with industry, including SME’s and multinational laboratories. His work is often highly interdisciplinary and frequently involves working with chemists and materials scientists. For over 20 years he has managed and maintained an MPMS XL SQUID Magnetometer as a user facility and since 2021 has been involved in establishing a hub for interdisciplinary based research around a suite of equipment that includes new MPMS3 and PPMS systems from Quantum Design. He is also a frequent user of international facilities, making use of neutron, muon and synchrotron techniques in his research. Current research interests include the interaction of magnetism and superconductivity, the magnetic properties of exsolved nanoparticles for applications in catalysis, and the properties of low dimensional magnetic materials based on halide chemistry.

The talk focuses on the very recent measurement of the anisotropic properties of very small single crystals of the two dimensional antiferromagnet CsFe(C2O4)F,  as an example of  making use of the sample rotation capabilities of our new MPMS3. If time allows anisotropic measurements on thin films of magnetic-superconducting samples will also be discussed highlighting the complementarity with anisotropic magneto-resistance (AMR) on our PPMS system.

Ellipsometers Events Spectroscopy
We are celebrating 22 years of Spectroscopic Ellipsometry workshops. This free of charge workshop is aimed at both experienced ellipsometry users as well as people new to ellipsometry.