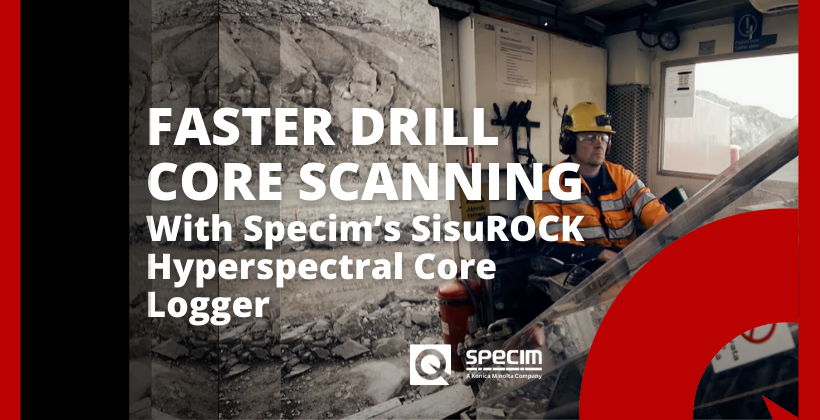 In this interview Kaj Lax, Head of the Mineral Resources Department of SGU, Swedish Geological Survey talks about their project of scanning 200,000 meters of drill core with Specim’s SisuROCK hyperspectral core logger.

Scroll down for the transcript.

It’s actually part of what happened and started 15 years ago…” begins Kaj Lax. “The European Union realised that we had a problem with providing EU with metals and minerals so they started off a raw materials initiative. The Swedish government set aside a fair amount of money for the survey to do more on Mineral Resources. The SGU scanning project is a result of that.”

“This archive contains more than three million metres of drill core from more than 18,000 bore holes, some of them almost 100 years old. The Swedish Geological Survey made a decision to digitise a part of this little core archive, and publish the results for free on the internet.” says Kaj Lax.

“When we started out, the Geological Survey looked around broadly at what was available on the market. We wanted a methodology that had been used before and that was already established. And that produced as much data as possible as quickly as possible for the money we had. The result was hyperspectral imaging.”

This is Specim’s SisuROCK hyperspectral core logging workstation. It contains three cameras for imaging the core. Specim’s Phoenix hyperspectral imaging camera, Specim’s OWL hyperspectral imaging camera and a high-resolution RGB camera. The SisuROCK measures infrared light reflected from the surface of the drill core. The shape of the spectrum of the reflected light, the absorption in the spectrum tells us which mineral the light was reflected from. So, it tells us which minerals are in the rock.

The SisuROCK can maintain a scanning speed of more than 200 boxes in an eight-hour shift, meaning that more than 2,000 metres of drill core. With the SisuROCK you can find minerals not visible by the naked eye, because they have a very small grain size, for example. You can also see and detect more gradual changes in mineral composition and mixing of several minerals. You define more boundaries more accurately and make new interpretations of the origin of the formation.

“We’ve already seen that there are examples where there is a clear mismatch with what the hyperspectral imaging data says and what the geologists on site had want and that is extremely interesting.”

“The objective for the Geological Survey now is to make sure that it’s available for exploration companies, mining companies, universities, anyone interested. The information in the data is probably going to lead to a mine, I would hope so I think so. We’ve seen some pretty interesting stuff already.

In my view, the most valuable properties at this workstation used the SisuROCK are the reliability and speed. It’s a very good combination when you have both.”