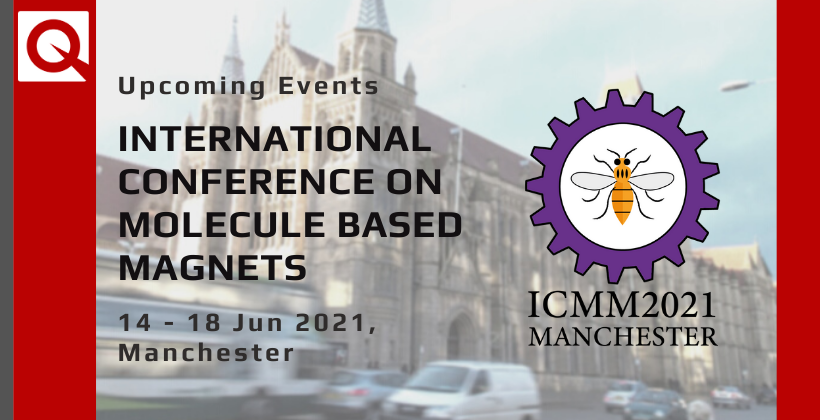 Due to the ongoing disruption of the COVID-19 pandemic, the organisers have taken the decision to make the 17th ICMM a fully-online conference. All of the plenary and invited speakers remain, and information regarding programme, abstracts and registration, will be updated as soon as they are finalised.

We are hosting a virtual stand and Randy Dumas, Applications Scientist with Quantum Design USA, will give a short talk.

We look forward to virtually welcoming you to Manchester – at least you won’t need an umbrella.

Keith works in the School of Chemistry within the Faculty of Science at Monash University, Melbourne, as an Emeritus Professor. His research interests are in the field of molecular magnetism dealing with single molecule magnets (SMMs), single molecule toroics (SMTs) and spin-crossover species. He holds grants from the Australian Research Council and recently held a grant from the Australia-India AISRF program. It is 54 years since he left Manchester University for post-doctoral work in Australia having worked with David Machin in the ‘old’ Gouy balance lab. in the basement.

Our research focuses on developments and applications of electron paramagnetic resonance (EPR) spectroscopy to problems in Biophysics and Structural Biology. EPR techniques provide dynamics, and geometric and electronic structures of paramagnetic molecules in solutions and solids. In addition we are interested in dynamic nuclear polarization (DNP) methodology to enhance NMR signals via polarization transfer from radicals.

Ania Bleszynski Jayich is a Professor of Physics and the Director of the Quantum Foundry at the University of California Santa Barbara, where she holds the Bruker Endowed Chair for Science and Engineering. She received her PhD in physics from Harvard in 2006. Her research interests include quantum assisted sensing and imaging on the nanoscale, diamond optomechanics, and hybrid quantum systems for sensing and quantum information. She is the recipient of the Presidential Early Career Award for Scientists and Engineers, the Air Force Office of Scientific Research Young Investigator Award, and an NSF Career award.

Hiroki Oshio graduated from Kyushu University in 1977 and obtained his Ph.D. in 1982. After a postdoctoral fellowship at Marquette University between 1982 and 1984, he was appointed as a research associate at the Institute for Molecular Science (Okazaki, Japan) in 1985. In 1992 he moved to Tohoku University as an Associate Professor, before he was appointed as a Professor at the University of Tsukuba in the Graduate School of Pure and Applied Sciences in 2001. His research has focused on molecular magnetism, including bistable and spin-crossover systems. He received the CSJ Award for Creative Work (2005) and for the Japan Society of Coordination Chemistry Award (2016). He has accumulated over 200 peer-reviewed research publications.

David Leigh is one of the world’s leading supramolecular chemists. He has developed a number of influential concepts for the synthesis of interlocked and knotted molecular architectures, introduced the use of ratchet mechanisms in the invention of synthetic molecular motors, initiated the field of small-molecule robotics, and is one of the pioneers of artificial molecular machinery and molecular nanotechnology. He has received a number of major international awards including the Izatt-Christensen Award for Macrocyclic Chemistry, EU Descartes Prize, Feynman Prize for Nanotechnology and, most recently, the ISNSCE (International Society for Nanoscale Science, Computation and Engineering) Nanoscience Prize.

Alongside ICMM2021, there are three fantastic Satellite Conferences. Details regarding online activities to be advised.

Events Imaging Cameras Webinars
Would you like to know more about the advantages of thermography for thermo-elastic stress analysis? Let yourself be inspired and deepen your expertise in a lively way.

Events Magnetometers Materials Characterisation
IMMC2021is fully online, Quantum Design are sponsoring a plenary lecture and hosting a virtual stand and we have a short talk from Randy at QDUSA.

Dr Shayz Ikram Events Imaging Cameras Uncategorized
The biennial Photonics Ireland conference series is the premier event for photonics research in Ireland, running since 2007. It covers a wide range of topics in Photonics.